Things Are Heating Up

Now that Winter is upon us, (-3F tonight) it's time to pull the Electric Jet out of service for winter maintenance. I basically have three projects: Add a heater; Improve headlights; Fix the door and window operation.


Heater: I have mocked up a possible heater setup ... and it seems to work well. Now I have to install in the car.


At first, I planned on installing an electric ceramic heater, as many have done, but decided against that because of potential safety issues. I think hot water will work better.


I bought a small hot water heater tank that is used in the winter as an engine block heater. (eBay) It has a 1000 watt 115vac heater element and will work on 96vdc, just fine. (Tank heaters are available up to 2000 watts.) I used a small 12 vdc hot water pump used in solar hot water systems to circulate the water. (El-Sid pump). Hooking all this in series with a new VW heater core, I proved that it will put out a good supply of hot air.


I will wire it in, in such a manner that I can run the heater on aux. home power for a time before departing, so as to pre-heat the car interior. When I'm ready to depart, I will switch it over to car power.


Before you ask: The whole heater system will require about 1,100 watts of power, when ON. Compare that to the 20,000 watts of power the car uses in normal cruise. This computes out to about an added 5% requirement, which in most cases will not affect power or range to any appreciable amount.


I think this will be a safe system, with minimal amount of controls required. If it starts to overheat, the hot water heater tank has a internal cut-off thermostat switch.


What could be easier?
Posted by Roger Daisley at 9:04 PM No comments:

What Happens When You Short Out The Pack

Here is why I always wear gloves and eye protection!

Today, I was doing the spring battery maintenance, which consisted of topping off the water and tightening the battery terminal connections. For the tightning, I use a 1/2" box end wrench that is wrapped with electrical tape. The only exposed part is the box end.

Today, however, I needed an extra wrench and I just grabbed another, unwrapped wrench. Unfortunately, it slipped and shorted across the entire pack of batteries in the rear of the car. This was "only" eight of the sixteen in the car. When it crossed the terminals, it was like a Fourth of July display, with hot molten steel flying in all directions. I can't imagine what would happen if full pack had been shorted.

In the second picture, you can see chunks of molten steel and tracks across the battery tops where the hot metal rolled across.

Word to EV builders and owners: BE CAREFUL. 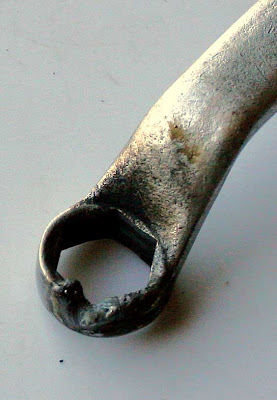 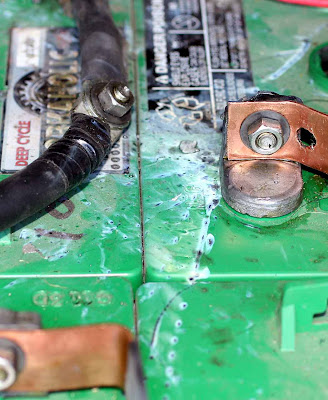 Posted by Roger Daisley at 6:32 PM No comments:

In my opinion there is a design defect in the Electro Automotive VW wiring scheme:

I have lost two 12 vdc vehicle aux. batteries. Last week, the second aux. battery ended up fully discharged … and frozen. (The temp in my barn has been in the 0-25 deg. F range.)

Whenever external power is plugged into the car outlet for charging, the 12vdc fan is activated to ventilate the rear battery box. The fan is powered from the aux. battery During this time, there is no recharging of the aux. battery. It's the same as leaving the car lights ON, when leaving the car ... albeit, with a much lower current draw.

I frequently plug in my charger in the afternoon, upon return home, and leave it ON all night, as my PFC-20, turns OFF at the appropriate time. It seemed like there was no downside to this technique. Several times, when the power was plugged in for extended times, even with the charger OFF, the aux. battery became fully discharged, eventually resulting in my buying a new battery.

During the worst of this winter, my car stays in the barn. In order to preserve the batteries, I use my PFC 20 to frequently charge the batteries. Last week, I left the charger on for 24 hours, in 10 deg. weather, with the charger set at the appropriate float voltage. When I checked later, I discovered the fan stopped, the aux, battery dead ... and frozen! I now have to buy another new battery.

I think it's a poor design to run the battery box ventilator with a 12vdc fan, powered from a source that isn't kept charged. I plan on replacing the fan, ASAP, with a 120vac fan that runs from external house power whenever the vehicle is plugged in.

If this situation applies to you, I suggest you replace the 12vdc fan with a 125vac fan, wired in appropriately.

Just my opinion.
Posted by Roger Daisley at 3:08 PM 4 comments: 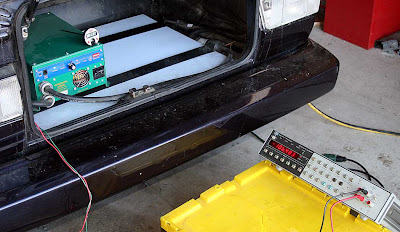 (CLICK photo for a larger image)
Posted by Roger Daisley at 1:01 PM No comments: 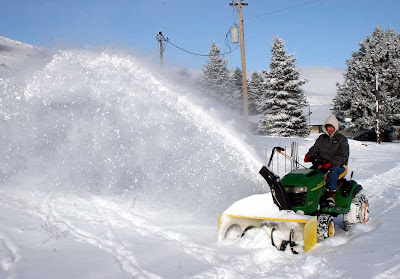 It's not the best electric vehicle weather ... especially considering that we're having a hard time even getting our Volvo XC90 (4-wheel drive!) out to the county road.

So, for the time being the VW is staying in the unheated garage/barn. While there, I'm being very careful to keep the batteries fully charged. I have a chart from the battery manufacturer (U S Battery) that states the "charge to" and "float" voltages. Using my HP precision digital voltmeter to monitor my Manzanita Micro PFC20 charger, I periodically do a charge to the "charge to" voltage, followed by a 30-min equalizing charge. This is the same technique I used last year. Even though the vehicle sat for about three months in temperatures as low as -10 degF, when I reactivated the VW, last spring, I saw virtually no loss from the batteries! I hope I can say the same thing this spring!

As far as the video, I mentioned in an earlier blog, that will have to wait until spring. I will get it done ... promise!