First update: The weather has been pretty good, so I've driven the car almost every day. It is really a joy to drive and has easily exceeded my expectations. On the local state highway (Hwy 195) it cruises right along at 55 mph, with little effort, even on uphill grades. (The speed limit is 60 mph, but keeping my speed at 55 mph reduces the power consumption significantly.) Trips of 45 miles are no problem and upon return home, I don't notice any power reduction. In fact, last week, while returning home, I decided to see how fast it would go. Answer: 70 mph ... and that was after having driven 30+ miles.
Second update: This is waaayy cool: I have another "introductory" web page that I list on my cards and handout flyers. It is: http://www.96-volt.com On that page is a very unique "hit counter." If you go to that page you will see it: It is a small square box with a map inside it. It is called "ClustrMap." You will notice many small red dots on the map. (CLICK on the map for a larger, more detailed look.) The size of the dots represent the number of "hits" on the page from that general location. You will see hits from all over the world ... some from surprising locations!
Posted by Roger Daisley at 8:53 PM No comments: 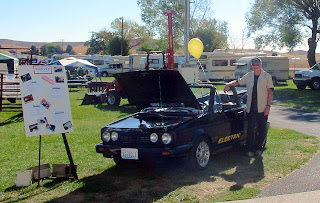 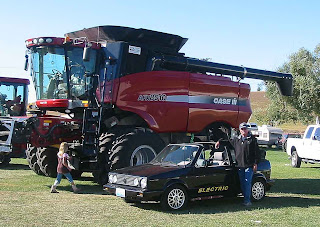 The most asked question, other than "how far/fast will it go," was why can't you hook up a generator to the electric motor and recharge the batteries while you drive ... like the alternator in a typical gas car?" (Anyone want to post a COMMENT and explain exactly why this idea either will or will not work?)
Posted by Roger Daisley at 8:26 PM 6 comments:

Here's an update on a couple of items:
DAILY DRIVING: I've been taking the car to town, every chance I get. It's really a lot of fun to drive ... crank up the XM Satellite radio, usually on Ch#13 "Willie's Place" (as in Willie Nelson) with the good old country music blasting out from all four speakers. (I do turn it down, in town!) Of course, the only sound is wind noise and music. Love it! We've driven to Moscow, Idaho, a couple of times with absolutely no problems. I cruise on the highway at the maximum speed limit of either 45mph or 55mph. Upon returning home, after 35 miles, or so, the power is still there and the State-Of-Charge meter usually is around 30% remaining.
DRIVING TO SPOKANE: I've decided, at least for this year, I'm not going to drive the car to Spokane. (75 miles each way.) There is no doubt it would make it OK, with one refuel/recharge stop at the half-way rest stop. The reason is simply that I don't want to hang around the rest stop for six hours, waiting for the batteries to recharge, then turn around and do the same thing the next day! Here at home, I've installed a 20-amp outlet for the charger. The batteries will usually complete the charge cycle in about five hours. However, at the rest stop, I can only count on a 15-amp power outlet, which will probably extend the charge time to six hours. Maybe next year, if I find a good book to read!
PALOUSE EMPIRE FAIR: Last week, one of my neighbors was looking at the car and suggested that I exhibit the car in the Fair, which is this week, Thursday-Sunday, in Colfax, WA. It's basically the Whitman County Fair. I called the fair director and he thought that would be a great idea, as an example of energy conservation. So, it looks like it will be there among other cars on display. Info and pix, later.
INSTRUMENTATION: As all the systems are working very well, except the vacuum brake booster (awaiting replacement part) I am adding a few instruments. First will be a motor tachometer sensing and interface unit which will drive the original VW tachometer. This will help me decide when to shift gears, as there is very little noise or motor feedback. (I usually drive in 2nd gear, except on the highway, when I shift to 3rd.) The original VW tachometer worked by "counting" the gas engine ignition pulses. Since there is no engine or ignition, the new sensor (believe it or not) counts the teeth on the flywheel starter ring, as the flywheel rotates, and digitally converts that into pseudo-ignition pulses, which the VW tachometer can recognize. (Real clear, huh!) Finally, (and this is easier to understand) I'm installing thermocouples on the motor and main motor controller to measure and record temperatures, during driving.
Posted by Roger Daisley at 8:16 PM No comments: