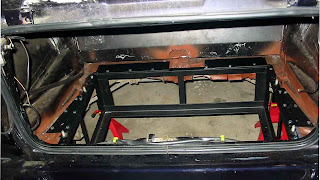 Today, I completed the installation of the rear battery rack. Whew ... glad that job is done! New speedometer and accelerator cables were also installed, along with a new fuse holder and electrical relay. Both electrical items are uniquely for the electrical car.

I probably could have the car actually running under electrical power by the end of next week, if it weren't for waiting for a new set of clutch bolts. Upon removal of the clutch and flywheel, today, I discovered that the nine special 12-point bolts were badly worn. I figured I better order a new set, which I did today.

Note: I discovered on the Internet a really great place for VW parts: Good prices and great service. They seem to have everything, even for a twenty-one year old car. The company is Autohaus Arizona. Highly recommended!
http://www.autohausaz.com/
Posted by Roger Daisley at 9:25 PM 1 comment:

General maintenance day ... no pix ... maybe tomorrow.
1) Replaced both rear flexible brake lines. (Old one's were badly deteriorated.)
2) Replaced the left protective boot on the steering rack.
3) Replaced the lower bearing on the steering column. (Had to remove and disassemble the entire steering column.
4) Replaced the hood release cable. (The old one was sticking.)
5) Riveted brackets under the car, along the path the exhaust pipe had taken, for placement of the 3" tubing that will carry the high current power cables from the back battery rack to the front rack.
6) Cleaned and coated the engine compartment with a coat of truck bed-liner. (Same coating as on the underside of the hood. It's very protective.)
That about does it for critical maintenance items. There are still some door handles that need work and a wing window that needs replacing. I also have to replace the passenger side window regulator (the mechanism that raises and lowers the window.) All parts are on hand, but I'll wait on those projects until after the car is up and running properly.
Fun day ... really.
Ps: While I was working, today, I was thinking about what I want for a radio/stereo. I decided that I'll just have a CD player and XM Satellite Radio ... no AM or FM. I was also wondering about a heater. I think I'll do as a couple of others have done: Use a couple of 110V hair dryers, mounted under the dash! I understand they work quite well.
Posted by Roger Daisley at 8:13 PM No comments:

Lots of work today, but no pictures.
In the rear battery compartment, I cleaned up the jagged sheet metal, where the hole for the battery rack was cut. Next, I cut holes for the battery box forced air ventilation system. Finally, I cleared away several brackets, that would not be needed, and opened up a pathway, under the car where the exhaust pipe had been, for the heavy current wires to run from the rear battery box to the front battery box.
Later this week, I hope to actually get the motor mated to the transmission and installed in the car.
Oh yes ... I submitted my application for the car to be in the 2007 National Lentil Festival Parade in mid-August. Now, all I have to do is make sure it's completed by then.
One more "Oh Yes:" Today, the local newspaper, the "Moscow-Pullman Daily News" published a nice little story about the project, titled: "Conversion puts new charge into VW." Nice story. I'll scan it and put a link to it, in the next day, or so.
Posted by Roger Daisley at 8:53 PM No comments: 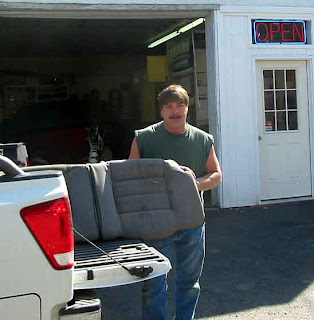 This morning I took the seats from the VW to "Dido Upholstery of Troy." It's a small shop, with a great reputation, in Troy, ID, a small town about 25 miles from home. He's going to recover all the seats and bring it up to OEM standards. 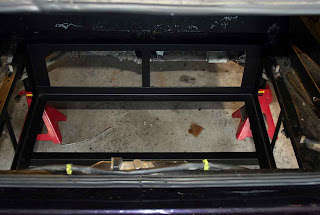 The afternoon was consumed with what was probably the most difficult job in the whole conversion: It was cutting out the rear deck in the trunk area for placement of the rear battery rack. This rack will carry half the batteries. The other eight will be in the front area, over the motor. Cutting this out was really hard because of the small cramped area to work in and the close tolerances. I had to use both a power reciprocating saw and pneumatic metal shears. Not fun ... but it's done! 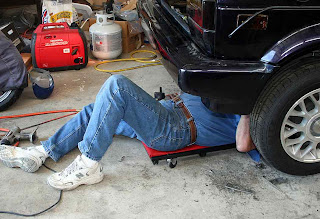 I spent a lot of time in this position, today! 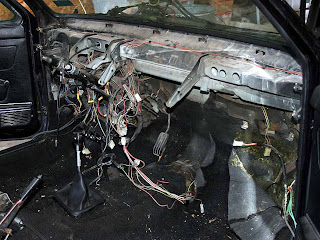 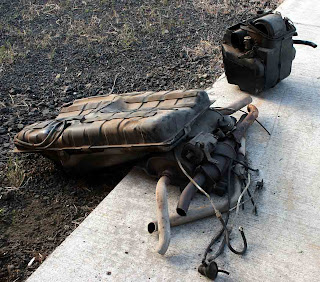 Today I removed the entire instrument panel. The main reason was to make it easier to remove the heater/air conditioning system. I also have to pull the steering column to replace a faulty bearing which make the steering seem kind of wobbly. (It was safe, but just didn't feel that way.) Hopefully I can get everything hooked back up correctly!
The pile of "Excess Parts" is growing. The latest addition is that squarish box which was the heater/air conditioner. Also growing is the list of things that I need to reassemble!
(CLICK the photo for a larger image.)
Posted by Roger Daisley at 7:26 PM 1 comment:

I Fought The Tank And I WON 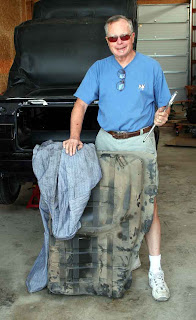 Tough battle today: I was going to leave the empty gas tank in because it seemed a pretty hard task to remove it. After studying the conversion manual, I discovered that I had to route some battery cables through the area where the tank was. Bottom line: The tank had to come out.

The VW shop manual says that to remove the gas tank, you have to first disconnect both rear brake lines, then unbolt and drop the rear axle. I spent half the day trying to figure out a way to remove the tank without dropping the axle, which seemed like a pretty serious job.

After attempting to saw the tank in half, with virtually zero success, I defaulted to the "school solution," involving dropping the rear axle. (The gas tank is virtually molded over the rear axle, so there is no way to simply unbolt it and remove it.)

I spent the entire after noon juggling four jack stands and a floor jack, and finally dropped the axle about six inches, allowing the tank to be removed. Other than a lot of maneuvering of jacks, it wasn't that hard, just time consuming. It was probably a good idea, anyway, since I discovered that the rear flexible brake lines were pretty well shot and needs immediate replacing.

I also gave the underside of the hood a good coating of "truck bed liner." This is a tough coating that will resist the fumes resulting from battery charging. I will doing the same coating the the engine compartment, after I get it cleaned up.

Posted by Roger Daisley at 8:11 PM No comments: 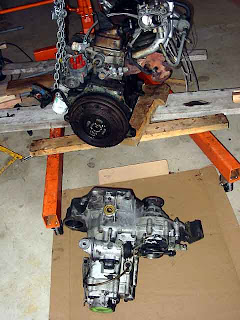 Kind of a slow day today. I separated the transmission from the motor and took stock of the various seals I need to order to get the tranny in a leakproof state. I discovered that there is an overhaul kit available that provides all the gaskets and seals needed.
Posted by Roger Daisley at 4:45 PM No comments:

Cleaning Up The Act 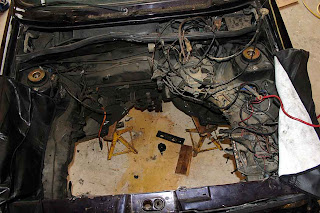 Here's the gaping hole where the ICE (Internal Combustion Engine) had been residing for the past 21 years. Note that I didn't just cut off all the wiring, but instead disconnected everything and moved it out of the way. Many of these circuits will be used again in the EV. 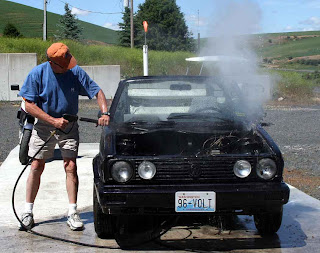 Today, I rented a power steam cleaner and thoroughly cleaned up the engine compartment. Tomorrow, I'll spray everything with a rust inhibitor, then spray on a liberal coating of pickup truck bed liner. The bed liner is hard tough coating that will not only look pretty good, but resist the acid fumes that the battery's vent while recharging. The underside of the engine hood will also be coated with bed liner.

Next, will be the separation of the transmission from the ICE and replacement of all the seals. The last thing I need is to get it all together and have oil dripping from the transmission. I look at it as cheap insurance. 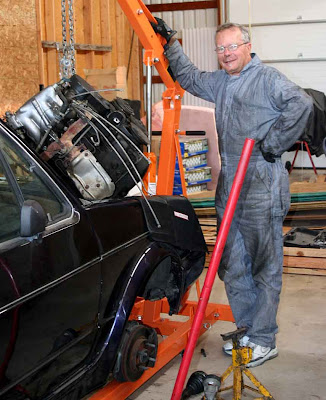 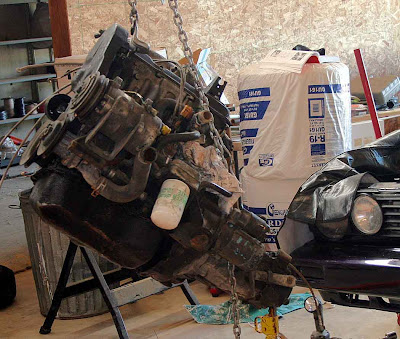 The old VW gas engine is now history. It was an all-day job getting it out. It required removing quite a bit of infrastructure, a lot of jiggling and tugging and a couple of fast trips on my motorcycle to NAPA Auto Parts for tools. Also removed was the entire exhaust system, which came out much easier than expected. (Thank goodness for power saws!) Next will be the gas tank and plumbing.
Posted by Roger Daisley at 7:04 PM No comments: 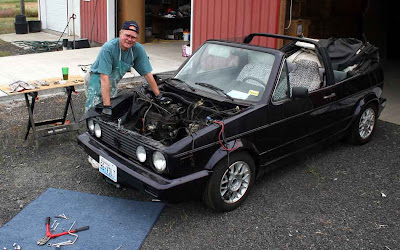 Looking to see if there are any "excess parts." 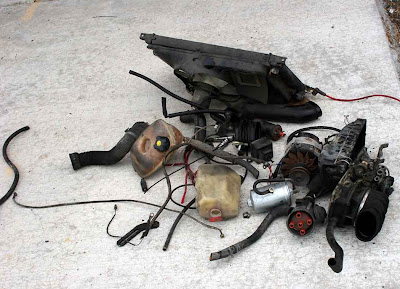 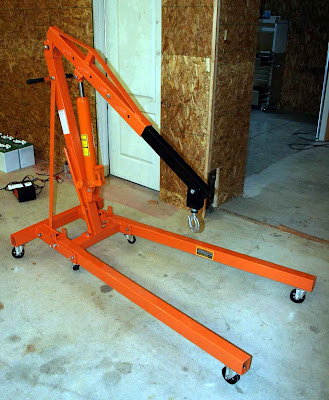 The hangman awaits!
Posted by Roger Daisley at 10:07 AM No comments:

Topping Off The Tank 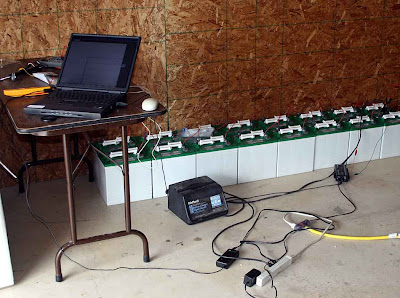 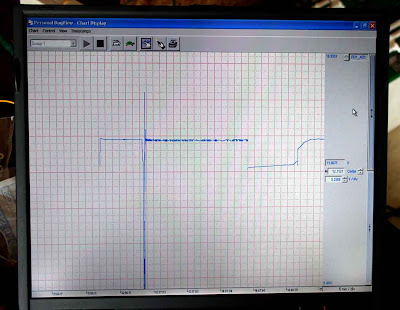 To insure every battery is up to standard, I charged each one either individually or in pairs. To monitor the charger and each battery's response, I used a 30-channel recording digital voltmeter (good to five decimal place accuracy!) which works through a notebook computer. Only one channel was hooked up, but later, all sixteen channels will be working to constantly monitor battery "health & welfare."
(Note: I recently bought the notebook computer on eBay from Washington State Surplus Sale for a meer $100. A good buy!)
(CLICK photo for a larger image.)
Posted by Roger Daisley at 6:06 PM 1 comment: