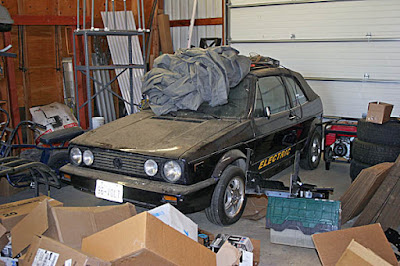 For the last five years my Electric VW Cabriolet has been "lounging" in my barn. Prior to the "internment" I drove it almost 20,000 miles, until the original set of 16 golf-cart batteries finally pooped out. It was my intent to replace the "flooded lead-acid" batteries with Lithium cells. At that time, Lithium was very expensive. I calculated to obtain the same performance, the Lithium battery pack would cost around $12,000. I decided to wait until the cost declined substantially.
Gradually, the cost for Lithium dropped ... but until last years, it was still over $7,000. With the wide acceptance of comsumer electric vehicles, such as the Toyota Prius, the Chevrolet Volt and the Nissan Leaf, there were a certain number of these vehicles that ended up crashed. One vehicle, in particular, the Nissan Leaf, had a Lithium battery pack that was quite adaptable to custom-made electric vehicles. Many were salvaged. 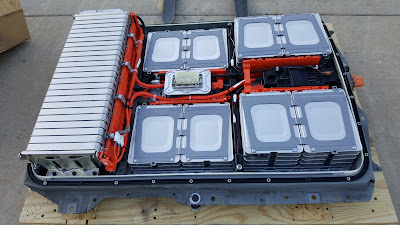 This is a battery pack from a Nissan Leaf that I purchased last week. It consistes of 48 lithium modules, each about 8 vdc, for a total of about 385 vdc. Since my VW's controller has a maximum voltage rating of 144 dvc, I will split the battery pack into three parallel strings of 16 modules, each, for an output voltage of 128 vdc. (My original golf cart battery pack was 96vdc.)
With the original battery pack, my maximum range was about 50 miles and a top speed of 65 mph. With this new lithium pack, I am hoping for about 50% great numbers.
Follow along, from day-to-day, as I upgrade the vehicle.
My hope is to be up and running by mid-August.

Posted by Roger Daisley at 6:53 PM