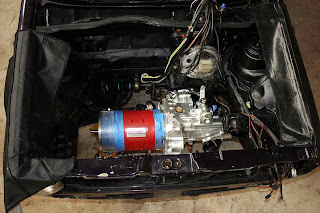 Jacquie and I spent almost two hours jiggling and juggling the motor/transmission assembly to get it seated and properly located. There are four engine/transmission mounts that have to be perfectly lined up ... or it just won't fit. We got three of the four bolted in, but ran into a "show stopper" with the fourth.


The fourth motor mount is one supplied by the kit manufacturer. When I went to bolt in on, as per instructions, I discovered that the bolt holes are 45 degrees off! After a frantic call to the kit supplier, I learned that "there was a change" that failed to be mentioned.


To remedy the situation, I could pull the motor/transmission unit back out of the car, pull the transmission off the motor, remove the clutch assembly and then re-bolt it all back up, rotating the motor housing 45 degrees. I elected NOT to do this.


Instead, I am having a local machine shop weld a steel plate on the motor mount, then I will re-drill the holes to fit the motor. (There wasn't enough metal on the original motor mount to re-drill it.) I expect to get it on Monday.


In the meantime, I'll wrap up the rear battery box job and then do some re-wiring of the headlights. They didn't function too well before the conversion. If I still have more time, I'll work on some door problems.
Posted by Roger Daisley at 6:38 PM