As many of you know, one goal I have held since I started construction on the Electric Jet, was to have it completed in time to be an entry in Pullman's Lentil Festival Parade. I accomplished that goal. 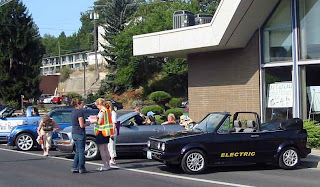 All the single cars that would be in the parade assembled prior to the parade start. Most of the convertibles carried dignitaries and other assorted "Princesses." Since I was a rather late entry, I was the "back-up" car, just in case there were too many VIP's. As it turned out, I wasn't needed for VIP transportation. (Hmmm ... I wonder if it had anything to do with the fact my car is twenty-one years old and all the others were virtually brand new Mustangs and BMW's? I guess we'll never know! Oh well, think about how much exhaust pollution I offset!) 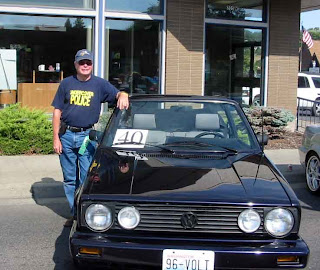 We Made it!
(I couldn't help but to wear my "UNDERCOVER POLICE" tee-shirt. It matches the car colors ... plus it's a great conversation piece.) 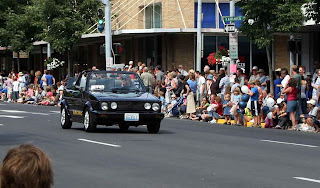 Here it comes, Ladies and Gentleman ... a fully battery powered VW Cabriolet that can run at highway speeds and go fifty miles on a single dollar of electricity. 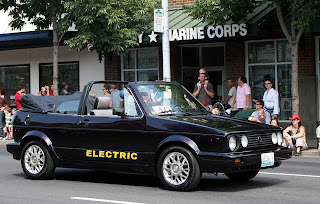 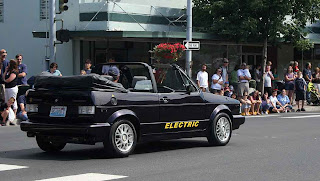 I was really proud of the car. It never looked better and ran just as expected ... maybe even better! Before the parade started, I opened up the hood for the many curious people to inspect. One gentleman, who gave me his business card, told me if I ever wanted to sell it, he'd buy it ... even after I told him what it would cost. 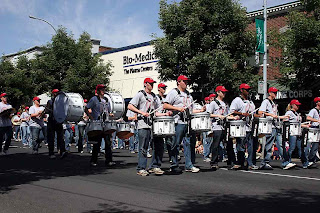 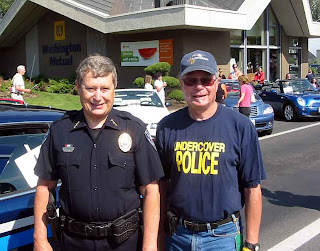 I couldn't pass up this photo op with Pullman's Chief of (Undercover) Police. His comment: "Where'd you get that shirt?" (At least, he was smiling!)

Posted by Roger Daisley at 5:12 PM

Your blog keeps getting better and better! Your older articles are not as good as newer ones you have a lot more creativity and originality now keep it up!